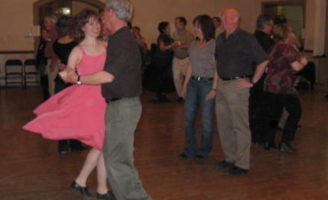 The Greater Washington Ceili Club (GWCC) is a non-profit organization, organized and incorporated in 1985, to promote traditional Celtic dance, music, and culture.

The club sponsors, supports and encourages ceilis, concerts, dance classes, and other programs for the enjoyment of its members and the community at large. You are invited to become a member to more fully participate and support our activities.

If you enjoy traditional Irish music and would like to be able to participate, you can play an instrument, you can sing, and you can dance. There is more to Irish dancing, however, than the pretty dresses and curly hair that are the hallmark of step dancing. There is ceili dancing, set dancing and sean nos dancing.

Traditional country set dances are very similar to contra dancing and square dancing. They usually involve a set of eight people and can be simple or complex. Like any group activity, the enjoyment is in achieving a goal as a group and the satisfaction of fulfilling your role in the group.

The Greater Washington Ceili Club has classes where you can learn, ceilis where you can have fun, and performances where you can show off. Since the music is a critical component, we also appreciate it in a concert format when we don’t dance. Similarly, we recognize the need to look to the future, so we have our scholarship programs.

If you think this looks like your kind of fun we invite you to try it out.
Come to a ceili / Sign up for dance class / Listen to a concert